WHERE WILL AMERICAN CRIMINAL PROCEEDS GO AFTER FATCA ?

Foreign financial institutions are notifying many of their American clients that they are closing their accounts. The reason: FATCA, the Foreign Account Tax Compliance Act, which, effective in 2013, forces banks located outside the United States to find and disclose all their American account holders' information to the Internal Revenue Service. The penalty for non-compliance is a shocking 30% withholding tax, from those banks' income, from US financial assets they hold.

The banks aren't the only one running for cover. What about that dirty offshore cash, owned by American criminal elements; drugs, illicit gambling, prostitution, counterfeit consumer products, and other illegally-derived profit ? Money launderers who move those criminal proceeds offshore, and mind them for clients, are probably enjoying some sleepless nights right now.

What if the banks in country where they are keeping all that flight capital decides to comply with FATCA, and avoid the dire consequences  ? Though bank secrecy still prevails in many of the more desirable jurisdictions, bank self-interest may trump confidentiality at the wrong time for American drug traffickers, organised crime, and other of the usual suspects. In short, they could be identified to the IRS by their own bankers. This includes carefully laundered funds that certain bank customers do not want disclosed to the taxman for obvious reasons.

Bottom line; it is time to move on. But to where ? I have a few possibilities that you should bear in mind:

(1) To jurisdictions whose banks do NOT invest in US financial assets, thus removing the looming threat of the Draconian thirty per-cent tax.  Don't laugh; not everyone invests in America.

(2)To rapidly launder the money, and then to repatriate it into the Continental United States. A hotel on Miami Beach, an office building in Manhattan, or income-producing property in California, being inside the US, will not be affected by FATCA.

(3) Converting it into other forms, such as valuable gems, art and antiques, or even bulk cash. One could always turn it into electronic funds as necessary. The problem could be safe storage, though, and the risk of seizure.

(4) Placing it into some entity that is not required to report. Can you say NBFI ? 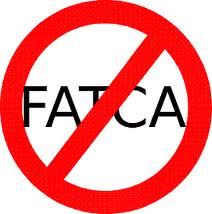 Whichever method the money launderers employ, they may leave a paper trail. Watch for any indicators, such as those that appear above, between now and the effective date of FATCA, which is 1 January, 2013. Try not to facilitate such capital flight, lest your bank be named and shamed in public when the IRS catches the offender.