French authorities have opened a criminal investigation, and filed criminal charges against Patrick de Fayet, the former Managing Director for UBS France SA. Fayet is suspected of money laundering, and of assisting high net-worth French nationals to conceal their assets and evade income taxes. Two other former UBS staff had reportedly already been charged in the case.

Fayet allegedly formed foundations in Liechtenstein for French clients, and thereafter opened accounts at UBS in the names of those entities, without disclosing the names of the beneficial owners, who were evading taxes. He reportedly used straw men to pose as foundation officers and staff. He is also believed to have assisted wealthy German nationals to evade a new taxation programme.

UBS has declined to respond to the charges, stating that it does not comment on former employees. Fayet reportedly was associated with a number of Swiss bankers who have been charged in the United States with aiding and abetting American taxpayers in concealing their assets abroad.

With its status already tarnished by US regulators, for admitting to helping American evade taxes, and secrete assets, UBS does not need an additional black eye, which this arrest will certainly cost it. Will other UBS staffers also be charged with money laundering ? Stay tuned to find out. 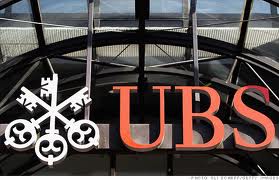