WERE ROCKET LAUNCHERS SHIPPED INTO PANAMA DESTINED FOR IRAN ? 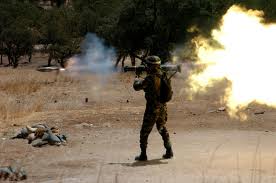 An unfolding scandal in Panama this week; the Director-General of The Panamanian National Customs Authority, Gloria Moreno de López, resigned, and her resignation was accepted by President Martinelli. It appears that one of the reasons for her resignation was the merger of her department with that of the Ministry of Security, which has been reportedly involved in participation in a number of corrupt activities.

Here is what appears to be the major reason: Customs is being improperly pressured, by certain government officials, to ignore specific containers coming into the country, and there is the well-grounded fear that this well increase further after the merger. One of these "special" containers was opened for inspection recently, and it reportedly contained rocket launchers, of unknown origin and destination. Since Panama has no standing army, and the vastly expanded border security force is not facing any known armed force, other than small FARC units in Darién Province, which are avoiding contact, it must be assumed that these weapons represent a small fraction of larger arms shipments.