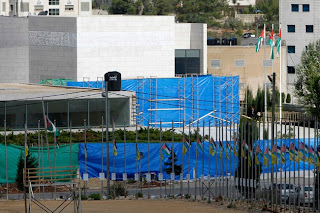 The upcoming exhumation of the body of former PLO leader Yassir Arafat, in connection with a new investigation into whether he was poisoned by someone within the Palestinian leadership, may expose more of the hidden details of the systemic corruption within the Arafat administration in Ramallah.  Was he killed because he would not allow a Palestinian leader to share in the proceeds of rampant corruption ?

Compliance officers at international banks that number high net-worth individuals from the Middle East amongst their clients, should always regard any Palestinian PEPs with substantial assets as unacceptable risks. Any large amount that they seek to place on deposit is most likely stolen aid money, donations that never reached the needy, diverted Palestinian National Authority funds, bribes or kickbacks, or some other form of illicit profits that does not belong to its owner.
Why any responsible banker would accept such obviously dirty money is beyond me, but the pursuit of profits blinds some to the reality that most large funds, brought in for deposit, by that rarest of individuals, the wealthy Palestinian who lives in the West Bank or Gaza, is not really a businessman, but a PEP with illicit funds in hand. EU funding, intended to reach the Palestinian man-in-the-street, is largely diverted by government officials concerned only with feathering their own nests.

Whether the Arafat investigation drags a few corrupt PEPs out of the darkness if unknown, but know that anyone, who dares to take large cash deposits from Palestinian Nationals living in the West Bank or Gaza, is playing with fire.