WHY ARE PEOPLE IN MALTA PLACING FAVORABLE INFORMATION ABOUT SADR AND PILATUS BANK ONLINE ? WHO IS PAYING THEM ? 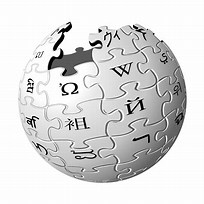 If you read our previous article, Ali Sadr engages in "Truth Control"about himself and Money Laundering Pilatus Bank, you know that the Wikipedia entries for both the Iranian money launderer, Ali Sadr Hasheminejad, and the bank he owns, Pilatus Bank, take major liberties with the truth, and seek to portray Sadr as some sort of innocent businessman who triumphed over bogus criminal charges. It is all about what is referred to as Reputation Management, or how to put your best face forward, while you lie through your teeth to your readers.

We assume that you were sufficiently angered by the sugarcoated articles, which intentionally manipulate the reader while playing fast and loose with the truth, to look closely as who in Malta is being paid to perpetrate this charade. Yes, we believe that they are being compensated for their participation in a PR campaign to restore Sadr's and the defunct bank's images." 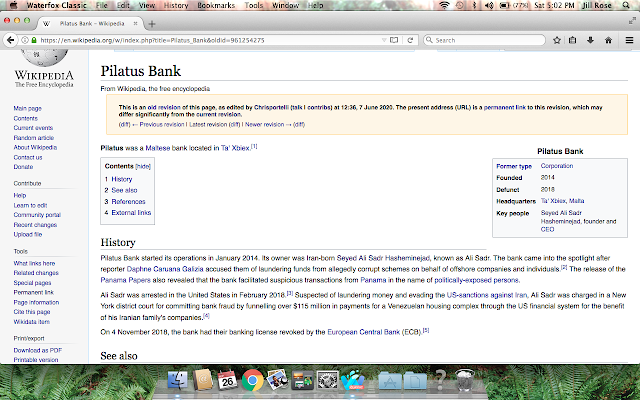 The article BEFORE it was altered to include deceiving but favorable information.

Contributors" (a/k/a trolls) to Wikipedia generally employ aliases, lest alert readers access their identities on the site, and hold them to account for their lies and sins of omission. One very sharp reader forgot one time only, to anonymize his edits and postings, and his name is CHRIS PORTELLI. His identity was confirmed through his long listings of contribution to Wikipedia pages. So who is paying him, some government official in Turkey or Iran, a sheikh in Qatar, or Sadr himself, looking to clean up his tarnished images so he can operate again on the global arena, showing positive media coverage, and claiming that his New York case was purely political. How many times this guy, using an alias, altered the truth we cannot say, but we know he edited many, many football pages and sites, so it is presumed that he has manipulated many a Wikipedia page for his masters. 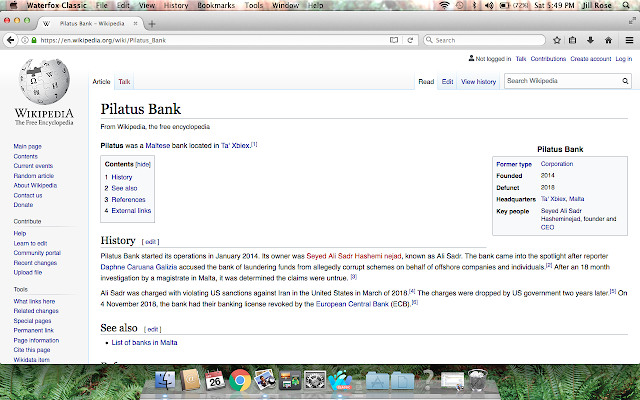 The article AFTER it was altered to enter favorable information.

We are taking particular offense to the addition of a sentence to the Pilatus Bank website, stating that a magistrate had found no money laundering or misconduct at Pilatus. Obviously it is intended to mislead a casual reader into believing that the bank was no guilty of money laundering. Look at how the edits were dropped in, giving the reader the impression that Pilatus was innocent.

The people of Malta should take personal offense to the fact that Mr. Portelli edited Daphne's Wikipedia  biography page, which was most certainly done without her family's or her attorney's permission. Her bio should be locked, unless new information of note surfaces, that will result in justice for Daphne.

Given that Sadr's money laundering through his Pilatus Bank, from Venezuela, and ultimately into Iranian hands, violated several local laws in Malta, these trolls frankly belong behind bars.  Who will put them there ?