WHO ARE THE 8 INDIVIDUALS FROM MALTA INDICTED BY A US COURT IN A SEALED CASE ? 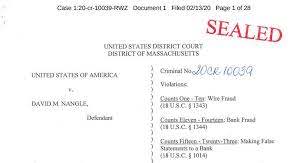 Due to overwhelming reader interest in the subject matter, we have surveyed our most reliable sources, in an effort to collect more definitive information on who in Malta might be named in sealed indictments pending in Federal Courts in the United States. Our contacts, having first stressed that the specific names of defendants already listed, or to be named, in existing sealed cases, are deemed to be Confidential, have stated that no person may disclose the indictment's existence, except as necessary to execute a warrant or summons. Those indictments remain sealed by order of a US Magistrate Judge.

Sealed cases involving citizens or residents of Malta will generally remain sealed until the targets are being held in Federal custody, but they may also be sealed to protect the identity of Confidential Sources or the details of an ongoing investigation Readers who require more information may wish to review Sealed Cases in Federal Courts, Federal Judicial Center, October 23, 2009, available here.

Here is what I have been able able to collect thus far. I must stress that none of this information has been independently confirmed, and that while the sources are deemed reliable, it may be incomplete or contain errors. That being said, here is what I have learned:

1. There is more than one pending indictment.

3. There is one case which involves eight high profile targets; I am hereafter referring to them as the 8 John Does. The defendants include current Cabinet-level officers of the Republic of Malta.

4. One case involves criminal activity surrounding the Citizenship By Investment program, known in Malta as the Individual Investor Program, (IIP).

5. There is a separate  criminal investigation, pending in a European, not American, jurisdiction, involving what are referred to as CBI criminals known to have very strong ties to Eastern Europeans and Russians, connected to the United Arab Emirates (UAE).

6. There will be additional named defendants in these cases, so do not expect to see them unsealed, and extradition proceedings commenced, immediately. It will be a few months before these cases are opened, and in the meanwhile, additional individuals will be added.

I regret that this is the sum total of what I was able to gather at this time; when additional details become known to me, they will appear on this Blog.