A reader asked me today if there was any documentary proof, meaning from a court file, that there are open cases pending against the present and former Malta government officials, in a matter we have named Maltagate. While any criminal indictments will be filed under seal, and disclosure of any information strictly prohibited, there are a number of clues to be uncovered, if you know what to look for. It often means sifting through related, or even seemingly unrelated, cases to extract some gems of information that will fill in one or more of the blanks.

Remember MATTHIAS KRULL ? He's the dirty German-Swiss banker operating in the Republic of Panama who pled guilty to a money laundering charge two years ago, and began cooperating with law enforcement, to reduce his ultimate sentence. He moved $1.2bn in embezzled PDVSA money out of Venezuela, through many countries, including Malta.  He's been under house arrest ever since; we reported that he acquired a residence in Miami recently, and we wondered why the change from his home further north in Florida, since he was scheduled to surrender in September.

Now we know why; when I checked with the Bureau of Prisons to learn where he was serving his sentence, and his Release Date, I found that he was NOT in BOP custody. A check of the Court file revealed the Order that appears below. He was not only given additional freedom, a delay until March 7, 2021 to report to prison, he was released from House Arrest (Home Confinement) as well as Electronic Monitoring of his movements. This is, trust me, an early Christmas present; instead of cooling his heels in some county jail, awaiting his turn to testify before a grand jury or at trial, he remains out on bond, in his new Miami residence. This is clearly preferential, and even special, treatment. This is not done every day; must be for a significant case.

Given that he can now be readily available to Miami Federal prosecutors, I would say that this is a very good indicator that they have plans for him in any Maltagate case opened in Miami, if not also the lead case, in the Southern District of New York. It is further evidence of his role in a major criminal case . We know that this small piece of evidence may not convince everyone, but there are sufficient indicia like this one to support the conclusion that the probable targets had better finish up their efforts to acquire US criminal defense attorneys post haste. 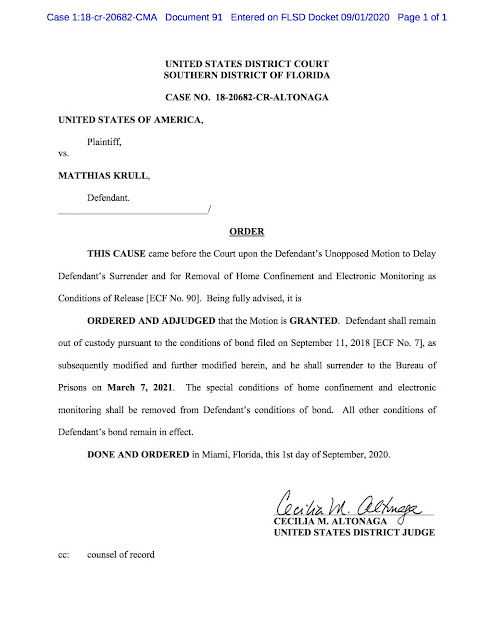