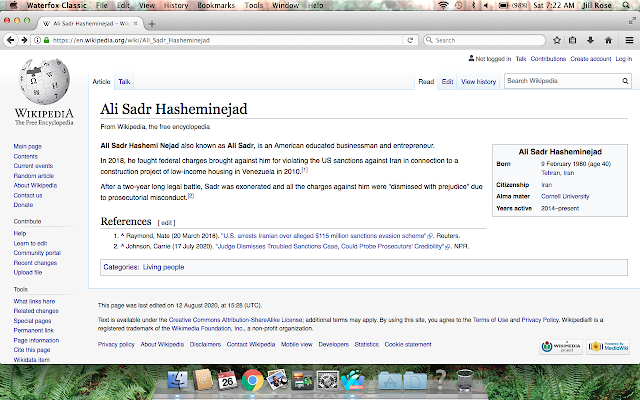 Someone is trying very hard to change the truth about the Iranian sanctions evader and money launderer, Ali Sadr Hasheminejad, and Malta's Pilatus Bank, his personal full-time money laundering operation which flourished, to the damage and detriment of both the European Union and the United States, for several years due to rampant corruption inside Malta's government.

Although we know that a jury convicted Sadr of multiple Federal felonies, the trial judge later dismissed all charges, after the US Attorney's Office in Manhattan confessed to what it alleges were repeated, though unintentional, errors that violated Brady vs. Maryland, his Wikipedia page boldly but inaccurately states:

"Ali Sadr Hasheminejad, also known as Ali Sadr, is an American-educated businessman and entrepreneur. In 2018, he fought federal(sic) charges brought against him for violating US sanctions against Iran in connection to(sic) a construction project of low-income housing in Venezuela in 2010. After a two year long legal battle, Sadr was exonerated and all charges against him were 'dismissed with prejudice" due to prosecutorial misconduct. Wikipedia.

Is there anything completely true in this Wikipedia entry ?  Let us analyze it:

(1) Sadr is an Iranian national  who is a lawful permanent resident, a status acquired through a prior marriage to an Iranian-American lawyer. He is NOT a citizen, though the article tries to humanize him by indicating that he is American-educated. How is that relevant here, except to mislead the reader ?

(2) Sadr was convicted, yet the article plays fast and loose with the truth, making him out to be someone innocent, but charged with crimes, who ultimately prevailed in court, due to misconduct. His guilt is cleverly sidestepped.

(3) That "low-income housing" was classic money laundering tradecraft. It allowed criminal elements to divert millions from Venezuela into the hands of sanctioned Iran, through Switzerland, using Sadr's St Kitts CBI passport to cast him as a non-Iranian. This was no humanitarian venture, to be sure.

(4) I would venture that whoever wrote this paragraph was not a native English speaker, and not an attorney. Look at the failure to capitalize "Federal" and the grammatical and syntax errors in the text.

Now let's move on to the Wikipedia page of Pilatus Bank: 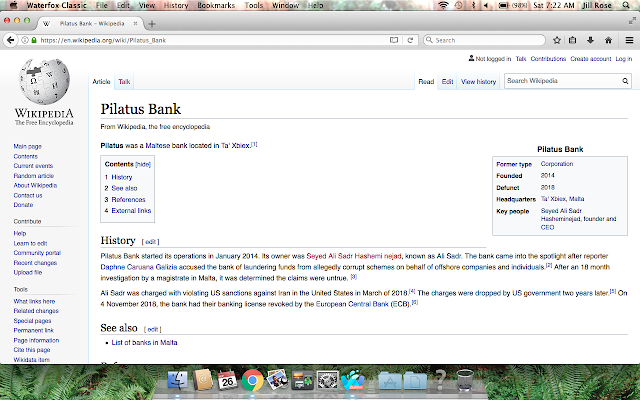 Give me a break, Sadr; an obviously corrupt magistrate judge in Malta "determined' that Assassinated whistleblower Daphne Caruana Galizia's claims of money laundering were untrue. this is also an exercise in what we can only refer to as Truth Control, a poor effort at disinformation and misinformation, intended to mislead the casual Internet user. What I fear is that in the future a young compliance officer, or  businessman in a hurry, will rely upon the Wikipedia page in dealing with Sadr, after a quick due diligence check, and end up a crime victim, or charged with sanctions violations or worse, a co-conspirator, in a criminal case.

Perhaps it might be wise for someone to publish to the Internet sufficient documents from the case, complete with meta tags, to insure that any search of the Web turns up the truth, and not someone's misleading version of the facts, cleverly designed to cast Sadr as a victim of a wrongful prosecution, and not a convicted money launderer, whose verdict was set aside on purely procedural grounds, and not because he was innocent. had his convicted stood, he would have served many years in Federal Prison, and  then deported to his native Iran.