WHAT DID THE ANTIGUA GOVERNMENT KNOW AND WHEN DID IT KNOW IT ? 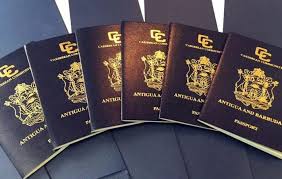 We are concerned that the fact that two hundred blank Antigua passports that were assigned to a Chinese billionaire, to vend in Hong Kong. and never delivered to their owners, allthough they were thereafter to be delivered to individual Chinese recipients, ended up in the hands of criminal elements. If the SVG Drug Squad had not arrested two suspects, and seized all the necessary components they had to create bogus Antigua passports for illegal global use, the truth might never have been known.

So the question must be asked: how long did the Government of Antigua know that the passport pages were being sold, and when did it know that ? Obviously, the two hundred passports were in the custody and control of the Ministry of Foreign Affairs, but never released to Xiao's clients, and then mysteriously stolen; two individuals that are, or were, part of that ministry are the other local suspects in the Antigua-based passport smuggling scheme, whereby the genuine personal history pages were removed, and sent to the Saint Vincent-based passport sales gang.

Given that the 200 passports were never delivered to Xiao's clients, did the then-Minister of Foreign Affairs notify senior government oficials of this fact ? It is reasonable to suspect that notification was made, especially after Xiao diaappeared from Hong Kong under suspicious circumstnces that led most to believe that he was kidnapped by agents of the Peoples' Republic of China for alleged financial crimes. Who released those passports ? What about the so-called "Inventory Control" that was purportedly in force in Antigua ?

How did those passports end up in the hands of a controversial Police Inspector ?  The Ministry of Foreign Affairs has a lot of explaining to do, the public in Antigua deserves to know what senior government officials know about the 200 passports, and when did they know it.
Posted by Kenneth Rijock at Saturday, April 14, 2018