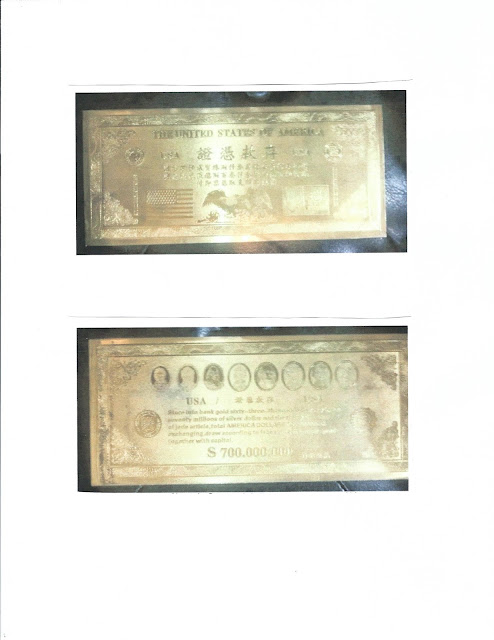 This is what purports to be some sort of US Treasury inter-bank financial document, in the amount of seven hundred million dollars, which allegedly allows funds to be drawn against it. It recites that it is backed by gold, silver and jade, and was rendered in what creators want you to believe is either gold foil or gold leaf. The gold is supposed to convince and impress the victims.

By far the most unusual component of the "document" is the fact that its terms and conditions appear in the English, as well as Chinese, languages. It was obviously tailored to defraud Chinese speakers who are not bilingual. A small Republic of China flag on the front of the instrument betrays the fact that it comes from Taiwan; I guess even fraudsters are patriotic.

A large number of counterfeit, bogus, and outright unbelievable financial instruments, including the currencies of several countries, and bonds in astounding amounts, originate from the Peoples' Republic of China, though most end up in the Republic of Korea, whose trade with the PRC allow these frauds to be funneled into the West.

Inasmuch as no financial professional would accept this document, and most would probably laugh out loud if it was ever presented to them, we must assume that only inexperienced (or greedy) Chinese businessmen are the intended targets.