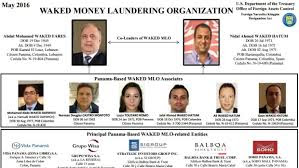 A US District Judge in Miami has ruled that the Federal Government is not entitled to an Order of Forfeiture against Nidal Waked Hatum, who previously pled guilty to a number of money laundering-related charges. Waked is known to be a senior member of his family's powerful Panamanian money laundering syndicate, whose extensive holdings have been sanctioned by OFAC.

The Court has not yet issued a written order on the matter, so we will examine the positions of the Waked defense counsel, and the US Attorney, as they presented them, in court filings.

(1)  The imposition of a forfeiture money judgment in this case would be inappropriate because the laundered funds are no longer in the possession of the defendant.

(3)  Any In Personum fortfeiture money judgment would consititute an excessive fine that would violate his rights under the Eight Amendment of the US Constitution.

The Government's position on the issues:

(A) Possession of the laundered funds is not necessary for the entry of a judgment.

(B) The use of money judgments in criminal forfeiture cases is well settled.

(C) The proposed money judgment is presumptively constitutional, pursuant to all the factors used to examine Eighth Amendment challenges. It is not an excessive fine under the Excessive Fines Clause.

The defendant is accused of laundering more than $20,000,000 over a period of years. US press is not covering this news, but the Panamanian press is carrying it as a major development, though the  legal principle that the Court based its ruling upon is not yet known, and will not be known until the order is issued.

Panamanians have been unhappy with the OFAC sanctions, entered against Waked's extensive empire of legitimate businesses, which employ a very large number of people. The Waked money laundering organization, which has been an open secret in Panama for many years, enjoyed immunity from criminal prosecution by local law enforcement agencies, who were repeatedly made aware of its operations by local whistleblowers, to no effect. Corruption is suspected as the reason for the inaction.
Posted by Kenneth Rijock at Saturday, April 07, 2018