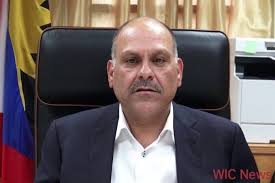 As more information becomes known, regarding the Antigua stolen passport scandal, one recent episode starts to finally make sense. When former Minister of Tourism, Economic Development, Investment & Energy, MP Asot Michael was detained & interrogated by British law enforcement, upon arrival in London, he was abruptly and immediately relieved of his ministerial portfolios. Why did that happen ? He was not charged with a crime.

Though there were accounts that he had Antigua passports in his possession when detained, they were curiously not on the inventory. Antigua spokesmen said he had no access to passports, so therefore, he could not possibly have any. Other sources, however, stated that he did, indeed have several passports on his person.

Here's a clue ; MP Michael is a cousin of one of the Antigua diplomat players in the 200 stolen passport scandal. We believe that some of those blank passports could easily have ended up in his hands, and had their existance in his bags been revealed , the cover-up would have been exposed. No wonder he was quickly, but quietly, cashiered, while retaining his seat in the Parliament of Antigua.

This brings up our pending question of the week: who in Antigua government knew about the stolen passports and when did they know it ?