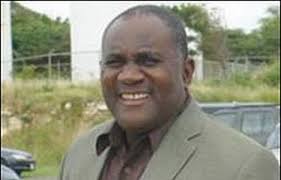 Leroy King, the former head of Antigua's Financial Service Regulatory Commission, and a six-year fugitive from American justice in the Allen Stanford billion dollar Ponzi scheme Federal criminal case, is reportedly contemplating cooperation with the US Attorney's Office, in order to obtain a favorable plea agreement. Should King be ultimately extradited, and tried, he could end up with what amounts to a life sentence in Federal Prison. Therefore, his reasons for cooperating are understandable.

Should Mr. King provide Substantial Assistance to the United States, there could be additional indicmtents in the Stanford case.  Antiguans believe that he would implicate a former Prime Minister, the current Prime Minister, other ministers, and two prominent East Caribbean attorneys, for their alleged role in Stanford's massive Ponzi scheme, involving the now-closed Stanford International Bank, whose headqurters was in Antigua. The former regulator has openly discussed the possibility of his cooperation with associates and friends, but there is no information currently available regarding whether he has, or has not, formalized any plea negotiations.
Posted by Kenneth Rijock at Wednesday, April 18, 2018