WHERE DID ANTIGUA'S PRIME MINISTER GET $673,000 TO PURCHASE A HOME IN FLORIDA ? 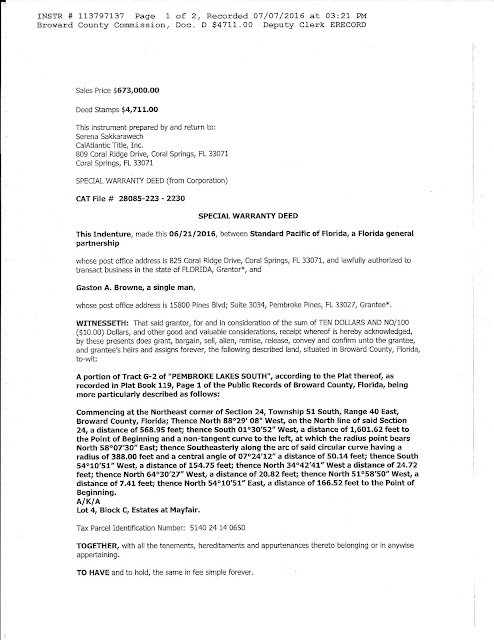 This is a 2016 Special Warranty Deed transferring title to improved real estate, located in Pembroke Pines, Florida, to Gaston Browne, the Prime Minister of Antigua and Barbuda. Note that it was an all-cash transaction, and the Prime Minister paid $673,000 for the property. Where exactly does a Caribbean government leader, earning only a small salary, get over six hundred thousand dollars to purchase a home in another country? We have verified that there was no mortgage financing. Mr. Browne needs to answer some questions about this purchase.

There are a number of Red Flags surrounding the transaction:

(1) Browne's mailing address is listed as a real estate broker's office in Florida, not the actual property address, which is located at the Estates of Mayfair.
(2)  Browne took title as "a Single Man," though we know that he is married with a family. Florida law provides that a wife is entitled to a portion of all realty owned by a husband during the marriage. It is not known whether he perjured himself by misrepresenting his marital status at the closing.

Why is Browne's wife not on the deed ?  She is from Antigua's Bird family, as is the wife of his attorney, Dominica's Anthony Astaphan. The Birds were closely linked to former banking regulator, Leroy King, who has been fighting extradition to the United States for a decade, and many observers believe that, when King is eventually removed to the United States, he will quickly cooperate with Federal prosecutors, and name all the members of the extended Bird family as recipients of massive bribes and kickbacks. That is why his extradition has reportedly been delayed for more than ten years.

If the Receiver appointed to assemble assets, to pay the victims of R Allen Stanford's Stanford International Bank, seeks to recover from the extended Bird family, he could seize the assets of Browne, claiming an interest in the proceeds of crime, if his wife was on this property. he could also  force Browne to identify the Source of Funds for the purchase, which might incriminate him.    Browne is alleged to own several; properties in the United States, the value of which far exceed his  ability, using his known income and assets, to purchase them.
Posted by Kenneth Rijock at Saturday, March 17, 2018