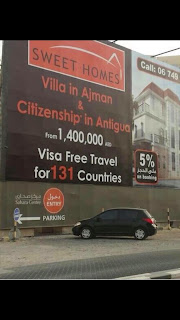 A fair reading of the above advertisement indicates that individuals who purchase a residence in Ajman, United Arab Emirates will automatically be able to acquire a CBI passport from Antigua & Barbuda. While the Government of Antigua has gone to great pains to emphasize that the applicants must duly qualify, the thrust of the marketing pitch of the developer, Sweet Homes Group, is that purchasers of one will quickly end up with the other. Given the long history of abysmal performance of due diligence investigations into CBI applicants in the East Caribbean, and the rumor that no applicant who has tendered funds for an Ajman property has been denied a CBI passport, any such assurances are meaningless.

Moreover, since the real estate purchase only calls for only a five per cent (5%) down payment at closing, and that prized Antiguan passport, which allows individuals from high-risk/sanctioned/terrorist supporting jurisdictions visa-free access to EU and Commonwealth countries, can be had, without spending an extraordinary outlay of cash, which other CBI programs demand.

Now, on to even more serious territory; students of modern Middle East history know that Yassir Arafat's PLO was the sole Arab organization that supported Saddam Hussein's 1990 invasion, and brutal occupation, of Kuwait. After the First Gulf War, virtually all the expat Palestinians residing in Kuwait fled, or were expelled, and a number relocated to the UAE. Palestinians, including those who identify politically with Hamas, are aware of Ajman's pro-Palestinian policies, wherever they currently reside. Hamas has government support in the Emirates, and its leaders cannot help but to be attracted to the project's plum prize passport. 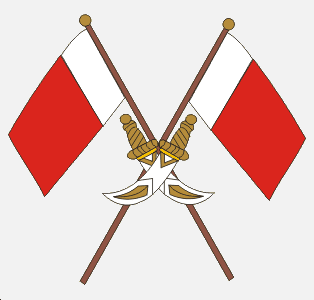 Additionally, Hamas agents can easily access information about this UAE-based company, complete a purchase, and go on to take possession of the property and passport, all without ever having to visit  Antigua or Barbuda. Those leaders under OFAC or international sanctions can evade identification by transliterating their legal names into slightly altered aliases, in the English language, allowing them worry-free international travel.

Only when a comprehensive list of all issued CBI passports is published will we be able to determine how many have been delivered to Palestinians linked to Hamas. The stated purpose of  CBI programs is to create cash flow for a developing country, including the purchase of local real estate investments by the applicants, creating jobs, as well as fees for economic passports, both of which impact the jurisdiction. This perverted version of CBI does not help Antigua & Barbuda recover from hurricane damage, and it results in totally unsuitable individuals, from high risk countries obtaining passports, which could be used for terrorist financing purposes.