ANTIGUA, WHERE EVEN THE DOGCATCHER HAS A DIPLOMATIC PASSPORT 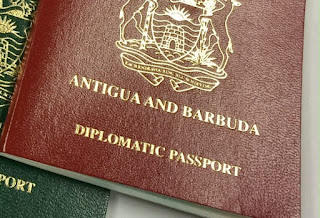 As we have detailed in a prior article, only a very small percentage of the Antiguans holding their country's diplomatic passport are actually accredited diplomats. The vast majority of the others are a mixed bag of dodgy foreign nationals, who have paid a princely sum for their treasured travel document, and local politicians, party members, friends and family, none of whom are legally authorized to receive one.

Under international law, diplomatic passports can only be issued to working diplomats, who are posted or assigned to a specific mission or task, and whose credentials must be presented, and accepted, by the authorities, at the jurisdiction where the diplomat is assigned to. The holder cannot use it for pleasure travel; he must use his personal passport. It is not a trophy, suitable to show off at parties, but restricted to actual diplomats. So why does the Government of Antigua give them out like candy ?


Let's take a closer look at the recipients:

(1) Members of the Parliament of Antigua & Barbuda parliament, and their spouses.
(2) A individual knighted by Antigua.
(3) A person designated "National Hero."
(4) An Honorary Consul.
(5) Government ministers & their wives.
(6) The Attorney General.
(7) The former Attorney General.
(8) The former Governor-General.
(9) The sales and marketing manager, New York.
(10) The Registrar of Lands.
(11) Economist.
(12) "Film ambassador."
(13) The children of most of the above.

Honestly, is there ANYONE in Antigua government that does not have a diplomatic passport ? One wonders how many times these "diplomats" have used their bogus documents to breeze their way past customs and immigration agents at airports in the developing world, used them to evade payment of costs and fees, and even attempt to evade arrest when detained, claiming "diplomatic immunity," which they do not, under any circumstances, possess.

All of the foregoing passports should be recovered, and cancelled of record; Antigua needs to clean up this mess, before it is embarrassed by someone trying to use it to facilitate a crime.

A final note: diplomatic passports are furnished without charge to bona fide diplomats. Did these individuals pay someone in Antiguan government to obtain them ?