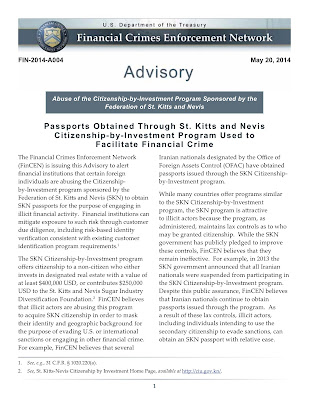 The next time some bank compliance officer in New York wonders aloud why the 2014 FinCEN Advisory on the country's CBI passports has not been cancelled, he might want to read the Indictment in United States of America vs. Ali Sadr Hashemi Nejad, 18cr0224 (SDNY). The case, which involves criminals evading sanctions in place against Iran, by moving $115m through a number of international banks, using a massive Venezuelan housing project as a smokescreen, showed how an Iranian money launderer used his St Kitts & Nevis Citizenship by Investment (CBI) passport to open an account in Dubai, claiming Kittitian nationality, to perform his opaque crimes.

So long as St Kitts continues to ignore its obligation to perform Enhanced Due Diligence upon its CBI applicants, and still approves unsuitable, dodgy, criminal individuals, that FinCEN Advisory  will remain in full force and effect. Perhaps all the other East Caribbean republics that offer CBI products might want to take notice, and upgrade their sub-standard Due Diligence programs to Enhanced Due Diligence, before they see one of these Advisories filed against their nation.
Posted by Kenneth Rijock at Sunday, March 25, 2018