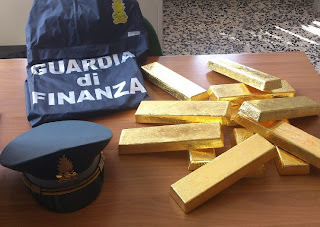 Officers from Italy's Guardia di Finanza detained an Italian-Swiss family of four at the Swiss frontier, and found a hidden cache of twelve gold ingots reportedly worth €4.5m in their personal automobile. The driver, who gave evasive answers under police questioning, has been charged with money laundering, and the gold seized.

The gold, which was located in hidden compartments, may be part of reported massive capital flight from Italy, due to increased tax collection activity on the part of the Government of Italy. Much of the wealth is rumoured to have been smuggled into Switzerland.