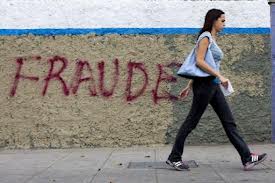 Two IT professionals, who worked the recent presidential election in Venezuela, have alleged that, although Capriles, the Opposition candidate, won the popular vote, they deliberately changed the official results, to show that Nicolás Maduro, the Chavista candidate, won. They say this was done on the express orders of senior officials of the Government of Cuba. This corroborates the Opposition claims that the election was rigged to favour Maduro, whose candidacy was openly supported by the Castro regime.

Over 30,000 Cubans are in Venezuela; they supervise many of the country's government offices and agencies, as well as its law enforcement, intelligence and military forces. Should a democratic government ever return to Venezuela, not only would these cadre be banished, the extremely preferential oil shipment arrangement with Cuba would probably also  be terminated. Cuba is due to start payment upon that debt later this year.

This new evidence merely reinforces my previous recommendation, that Country Risk levels for Venezuela have reached, or even exceeded the level at which international trade, or financial exposure, should not be engaged in. This risk of default or non-payment is simply too high.
Posted by Kenneth Rijock at Sunday, April 21, 2013