ISRAEL SHOOTS DOWN ANOTHER HEZBOLLAH-IRANIAN DRONE 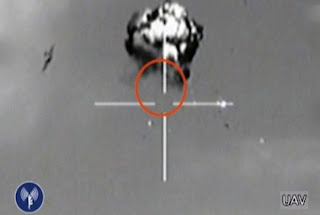 The Government of Israel announced today that it shot down an unmanned aerial vehicle, more commonly known as a drone, that entered Israeli airspace from Lebanon. the drone, which was flying at an altitude of 1800m, was eight miles west of Israel, near Haifa. IAF F-16s were involved in the action.

Reportedly of Iranian manufacture, it was believed to have been operated by Hezbollah. Middle East watchers will recall that a similar intelligence-gathering drone was shot down over Israel several months ago.
Posted by Kenneth Rijock at Thursday, April 25, 2013