WILL UKRAINIAN SOLDIERS FIND DOMINICA CBI PASSPORTS ON THE BODIES OF DEAD SYRIAN OFFICERS ON THE BATTLEFIELD ? 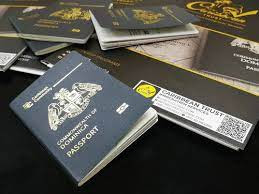 What's it going to take to make Dominica's utterly corrupt Labour government abandon its Citizenship ny Investment (CBI) passport sales programme ? I have an idea; should Ukrainian infantry pick Dominica CBI passports off the corpses of Syrian officers leading mercenaries fighting on behalf of Russia after yet another battle in which Russia's retreated, the world's  furor over Dominica's sale to bad actors might just be sufficient to torpedo the passport programme once and for all.

This is not so far-fetched as you might think; Russian conscripts carried dress uniforms onboard their armored vehicles into Ukraine, as their officers told them they would be participating in a festive parade through Kiev after they took the capital, and replaced the existing government with puppets favorable to Vladimir Putin. Who is to say the Syrian officers with CBI passports already in hand, their pockets fattened with Euros paid to them by Russia, aren't planning a subsequent European vacation ?

Whatever it takes, the Dominica CBI passports, as well as those from St Kitts & Nevis, Antigua & Barbuda, St. Lucia & Grenada, all need to be relegated to the history books. They are too dangerous in the hands of transnational white collar criminals and terrorist financiers. The question is: who or what will accomplish that goal ? Not the United States or the United Kingdom alone; only when those passports are declared not welcome at the world's airports of entry will they stop being facilitators of crime and terrorist financing.