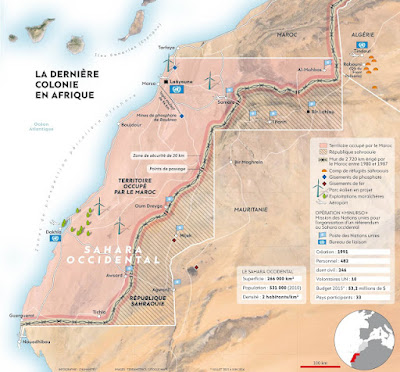 Perhaps it is time someone in the Commonwealth of Dominica explained to its Prime Minister, Roosevelt Skerrit the basics of international diplomacy, when it comes to the rights of a people to self-determination of their political future. When Skerrit, improperly acting under the authority of the Organization of East Caribbean States (OECS) opened a consulate in the Western Sahara, territory currently illegally occupied by the Kingdom of Morocco, he started a chain of events in motion that apparently has hurt the ability of the countries of the European Union to obtain energy supplies from a source outside Russia, which is now an international pariah due to its Ukraine invasion.

This week, the tense situation surrounding international disapproval of Morocco's occupation oil the Western Sahara, Made worse by Skerrit's implicit recognition of that act, which came to a head when energy giant Algeria objected to its natural gas, sent to Spain, being transferred to other EU countries, because it was routed through Morocco. Skerrit's tunnel vision, obviously made to encourage the purchase of Dominican CBI passports in North Africa, and made without OECS authority, has hurt EDU ability to wean itself off Russian energy at a critical time.

Skerrit, who academic degrees were not earned, but basically bought, has no experience nor education in international affairs, or in basic human rights, and looked only to the material gains he and his regime  were possibly to earn from recognising the placement of a consulate in disputed territory. Someone should send him back to school, as he has thrown the OECS into the matter on the wrong side of history.