WHAT'S GOING ON BEHIND THE SCENES IN THE REZA ZARRAB/ HALKBANK CASE ? 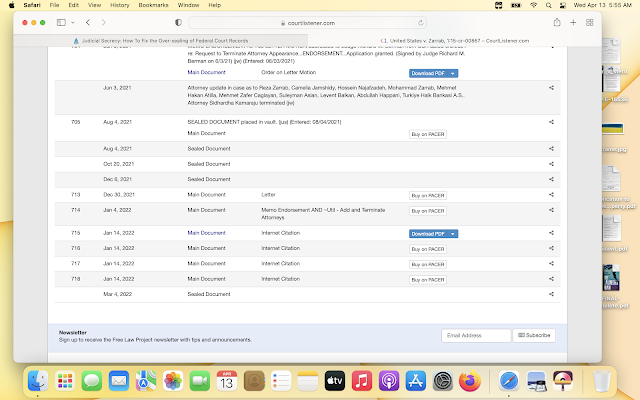 Sometimes, when following Federal criminal cases, what the government is keeping confidential is a good indictor that there's a lot more going on behind the scenes, than in the courtroom. In the high-profile Oil-for-Gold Reza Zagreb Iran sanctions evasion case, which is basically stayed whilst HALKBANK*, the Turkish-owned financial institution accused of facilitating the illegal sale of millions of dollars in Iranian oil, appeals to the US Supreme Court that definitely appears to be the case of late.

Remember, Halkbank's filing of a Petition for a Writ of Certiorari to SCOTUS, which the bank's counsel cleverly got the High Court to delay until May 13, 2022, claiming a heavy office workload, is only discretionary. the bank has already exhausted its appeals available to it as a matter of right. The odds that the Court will decide to hear the case are unusually not great, except in the matter of cases of Great Public Interest, or were there is a conflict in the decisions between the appellate circuits, which is known as Conflict Certiorari. We expect the banks' counsel to pay one or both of those tools to get the Court to consider the case, which turns on whether Sovereign Immunity blocks a criminal trial against the bank. We have previously discussed this issue in previous articles on this blog.

Getting back to the subject of this article; a search of the case docket turns up a very interesting observation; there have been ten sealed court filings in recent months. In fact, just about all filings for the past year are sealed, and unavailable to the public or press to review. As you may know, prosecutors seal court documents to hide information about yet-uncharged defendants, so that they do not flee to avoid prosecution. They also use sealing to conceal Grand Jury proceedings, which are secret, and information that is deemed important to National Security. There are also other grounds.

Therefore, whatever the grounds used to seal all those filings are, those documents are not available to us, but the mere fact that so many filings are sealed gives the observer a hint that there's a lot more to the case than simply the gathering of evidence against Halkbank, while the bank's Certiorari Petition has not yet been filed and ruled upon. Are there additional targets, or is there evidence or testimony against the bank that is classified ? We cannot say, but there is definitely something very important going on behind the scenes, and considering that in what we refer to as the Zagreb case, after the original primary defendant, we intend to continue to closely monitor all developments, until something appears publicly available, to answer that question. Stay tuned.

* The bank's legal name is TURKIYE BANKASI A.S., but in the English-speaking world it is commonly referred to as Halkbank. The S.Ct. case number is 21A373, for those readers who wish to follow the progress of the case.