IT JUST GOT EVEN MORE COMPLICATED: RUSSIA IS HIRING PALESTINIANS TO FIGHT IN THE UKRAINE 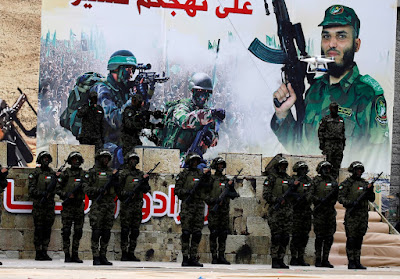 We have been talking about Russia shopping for additional fighters to supplement its dwindling conscript army in the Ukraine. Bad things always come in threes; first, Russia began to hire seasoned Syrian fighters to operate in the Ukraine, under the supervision of the Wagnar Group. Putin's favorite mercenaries. Then, reports came in that those Hezbollah fighters who are stationed in Syria, in support of the Assad regime, were also solicited. Remember, Russia is offering USD$600 a month, a princely sum to Middle Eastern soldiers.

Now, just when you thought it would not get worse, Russia has approached Palestinian fighters resident in Syria, and offered them the same lucrative arrangements as it extended to the Syrians. This new move adds a disturbing complication to an already international mercenary perfect storm. Russia knows very well that the Ukraine has a large Jewish population. Given that Palestinians engaged in violence in Israel and the Palestinian Territories, we must assume that, given the chance, Palestinian fighters who encounter unarmed Jewish Ukrainians on the field of battle, could target them for violence.

The more foreign mercenaries, fighting for Russia, who appear bin the Ukraine, the greater the danger that these mercenaries, obviously not obliged to adhere to either the Rules of Land warfare, nor the Geneva Convention, will commit still more atrocities and human rights violations.