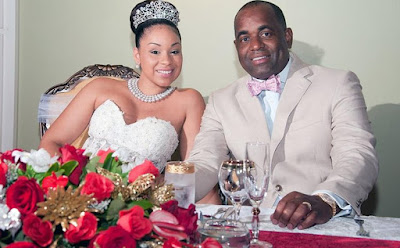 If you were interested in our article detailing how the disgraced former Prime Minister of Malta, JOSEPH MUSCAT is quietly moving his wife Michelle into a position to hold high public office, to allow him to control his country from the shadows, other autocrats follow a similar evil path to hidden power, the  corrupt Prime Minister of the Commonwealth of Dominica, ROOSEVELT SKERRIT, conscious of his recent vulnerability, and with hundreds of millions of US Dollars  in his accounts from bribes, kickbacks and money gleaned from the country's CBI passport programme, is trying to accomplish the same dark deed with his wife, MELISSA POPONNE SKERRIT,

Ms.Skerrit, who has been a member of the House of Assembly since 2019, is his favoured nominee to rise to power in Dominica, and allow him to work through her, in the background, when she ultimately rises to power. The fact that her regular place of residence is a luxury apartment in New York City, with their two children, born in the US and therefore American citizens, does not seem to have interfered with his goal. Dominica's Labour Party, which maintains itself in power through bribes, the promise of jobs, free travel for expats at voting time, and many other cash incentives to retain Skerrit in power.

The problem is, for Dominica, Ms. Skerrit, and ex-beauty queen, has neither the relevant education background, nor training or experience to properly discharge high office in Dominica. Unfortunately, she is unqualified, but that doesn't seem to have deterred PM Skerrit; he will place her in a prominent position nevertheless. The only losers will be the people of Dominica, who will have their dictator still pulling the strings long after he leave office.

Under her watch, expect still more cooperation with the government of Communist China, continued operation of the CBI passport sales programme, and incestuous deals with foreign developers who will feather Roosevelt Skerrit's  nest with still more bribes and kickbacks. Just one more banana republic with corrupt leaders filling their wallets with dirty money, but in this case, under new management. Old wine in new bottles, but it still smells.