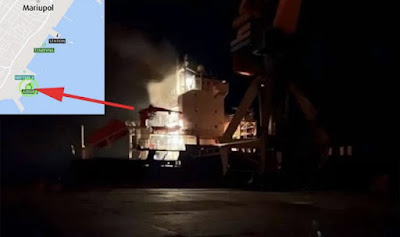 What you are seeing above is the freighter Azburg,  ablaze after being hit by Russian missiles and naval gunfire, whilst in the besieged Ukrainian port of Mariupol; it later sank. There was only one injury, and no fatalities among the crew.

While this story is only a footnote in the fog of war, the media focus upon the vessel, which we are certain was unwanted by certain parties, revealed its unusual legal status; reportedly owned by a corporation formed in the Republic of Malta, it was registered in and flying the flag of the Commonwealth of Dominica. One might ask why a freighter that delivered cargo in Europe was duly registered in Dominica, and therein is the reason for our interest.

Money launderers, and financial advisers assisting organized crime groups, employ multi-layered schemes to conceal beneficial ownership, and their tasks are facilitated by the policies existing in the offshore financial centres, more commonly known as the tax havens. In those jurisdictions, which advertise secrecy and privacy as their primary advantages, identifying beneficial owners is either extremely difficult, or completely impossible, due to local laws, governmental protective measures, or deliberately opaque documents designed to deceive. Both Malta and Dominica are known offshore financial centres, with corrupt, autocratic governments given to violence when it suits their leaders.

The concept is to make it too difficult to peel back the many layers of an opaque onion, in this case who owns a commercial vessel, aircraft, or yacht. An investigator seeking answers about the Azburg, for example, might not even be aware that corporation that owns the vessel is domiciled in Malta; he will only see the Dominica ship registration documents, If he somehow learns about its Maltese origin, he may later learn that only frontmen and lawyers appears= in the public records.

There are many places where Dominica and Malta intersect in the dark world of transnational crime. Regular readers of this blog may recall that one of the senior executives of PILATUS BANK, now closed by regulators and accused of money laundering in Malta, holds a Dominica CBI passport, according to reliable reports. ALEX NAIN SAAB MORAN, the accused Colombian money laundered who reputedly worked for Venezuelan President Nicolas Maduro, and who now awaits trial in Miami, moved $130m in criminal proceeds through Maltese banks; he owned two Dominica offshore banks.Moran and his partner both owned Maltese companies. both ou entries cater to Russian organized crime figures, including Oligarchs.

We thought our readers might enjoy a look under the blanket, so to speak, to appreciate the huge underground industry that serves the world of crime. Offshore tax havens, as you can see, may be oceans apart, but they are closer than you think.