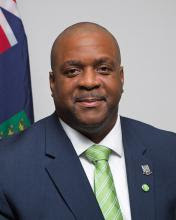 ANDREW FAHIE, the Premier (Chief Minister) of the British Virgin Islands, was arrested at Miami's Opa Locka Executive Airport today (April 28), in a sting operation conducted by the Drug Enforcement Administration (DEA), after a confidential informant for the agency was solicited by individuals associated with the terrorist organization Hezbollah, who were interested in bringing cocaine through the island of Tortola, en route the United States. There are reportedly audio and video recordings, and the acceptance of cash proffered by there undercover. The evidence appears to be strong; the statements attributed to Fahie are both incriminating and damning.

The criminal charges filed are:

(2) Conspiracy to Import more than five kilograms of Cocaine.

Also charged is another BVI government official, OLEANVINE MAYNARD, and KADEEM MAYNARD, her adult son. The allegations, which are contained in an 18-page affidavit in support of the Criminal Complaint filed bin the case, detail an arrangement whereby Fahie, in coordination with his co-defendants, would assist in the transshipment of multiple loads of cocaine into and through the BVI, and receive payment for their assistance. Fahie demanded USD$500,000 for facilitating the criminal smuggling operation.

Although the role of Hezbollah was only mentioned in passing in the affidavit, perhaps the most disturbing element of the case is the fact that the terrorists involved in the cocaine trafficking scheme knew BVI government officials, and indicated that they had prior dealing with them. The British Virgin Islands has been under a UK investigation for corruption, but this is providing material support to a specially designated global terrorist organization, meaning terrorist financing.

The defendants will have their First Appearance tomorrow in US District Court in Miami (SDFL). Documents on file indicate that the US Attorney's Office is requesting Pre-Trial Detention, meaning no release on bail. What the effect this case will have upon the reputation of  BVI officials is not known, but the British government has been notified.