Haunted by Daphne's Ghost, Dr. Muscat falls into Hellfire below by COSIMO

Four long years ago, Iranian-owned and controlled- Pilatus Bank imploded; the European Central Bank pulled its license, and the bank's primary mission, laundering the Proceeds of Crime from Venezuela, Iran, Azerbaijan, Russia and God knows who else, was publicly exposed. The bank was a supreme embarrassment to Malta, and to a lesser extent, the European Union, which had fast-tracked the license, with Maltese Government urging.

Now, four years later, notwithstanding that the Magistrate's Report recommended charging the Officers and Directors of the Bank with money laundering,and the Police Commissioner's promise to file them within 30 days, absolutely nothing has been done. the Maltese and foreign nationals who were Directors still reside in Malta,and are free to continue their dark deeds with impunity. 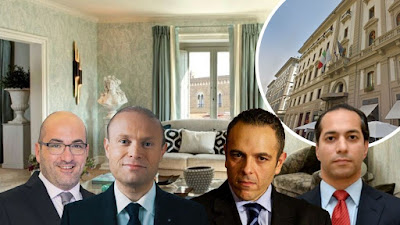 The tepid excuse unofficially offered by Government officials is that they are waiting for the US Federal case filed by the Bank, which is a request to make Discovery from the former Competent Person, to be dismissed. This is just one more Government trick to run out the Statute of Limitations on any possible criminal charges, for if Sadr was to cooperate in a Malta criminal case. he might implicate disgraced PM Joseph Muscat, PM Robert Abela, and several others who pushed the bank application, in exchange for bribes and other illegal compensation. Sadr would force Malta to name all the dirty players, and Malta's Labour Party, without its "Champagne Socialist" corrupt leaders, might disintegrate.

Therefore, since Malta's leaders still doubt that United States and the United Kingdom will actually do anything to bring them down, they play the dilatory legal game, praying that they can get away with it. How wrong they are.