THE MYSTERY SURROUNDING MATTHIAS KRULL'S SEALED FILES GETS EVEN KNOTTIER 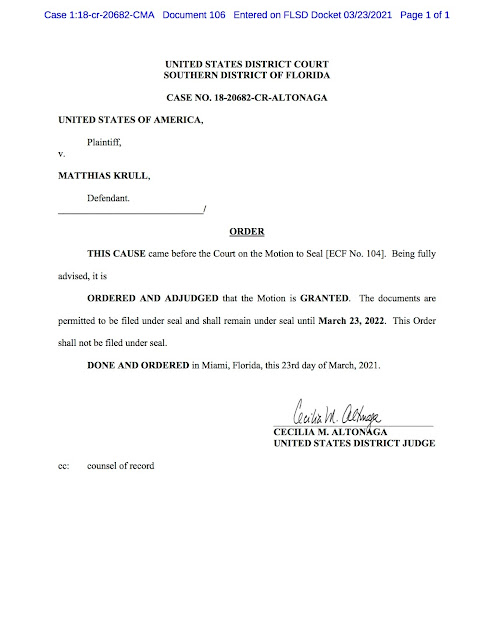 If you have been closely watching developments in the case of Swiss banker & convicted money launderer Matthias Krull, you know that a court ruling in the casewas ordered sealed for one year. Considering that Krull is believed to have important information about the money launderers in his Miami Federal case, and in a yet unfiled case in SDNY, involving money launderers operating in the Republic of Malta, any Grand Jury testimony,,(which is sealed by law) he has given, could affect both cases.

When it was recently unsealed, the year having run, we learned that the defendant received an extraordinary 65% reduction upon his ten year prison sentence. Federal Rule of Criminal Procedure 35(b) allows a defendant's sentence to be reduced for "Substantial Assistance" in the indictment of others, or government acquisition of important assets. Most sentence reductions granted do not exceed fifty per cent.

At the same time of the unsealing of the sentence reduction order from 2020, the Court also sealed yet another document, which now has an additional year before it can be opened by the press and public.What could it be this time ? There is an obscure provision in Rule 35(b) that allows the Court to take a second bite out of Krull's sentence. This section is seldom used, as assistant US Attorneys want defendants to serve a substantial portion of their sentence, and shaving off most of someone's sentence may send the wrong message to the public.

What is in that sealed order with the strange one year measured expiration date ? Most sealed documents in a criminal case are so designated to conceal the identities of other potential defendants not yet named, or other information that the Government cannot release. Is Matthias Krull going to receive a reduction of the balance of his sentence, allowing him to walk out a free man ? Is this possible reduction contingent on Krull testifying in court in a future case ? There is no information available, but the Miami money laundering defendants, as well as the targets in Malta, should be concerned. Krull may be the golden goose for the US Attorney's Office, the person who will be a key witness in their cases, resulting in their convictions.