TROUBLE IN PARADISE: MICHELLE MUSCAT, FEARING THE LONG ARM OF JUSTICE, SPLITS FROM HER HUSBAND 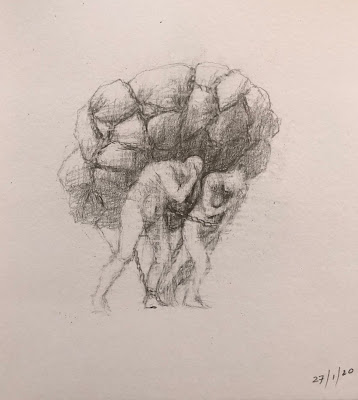 Joseph and Michelle leave the Garden of Eden by COSIMO

A source inside Malta's Labour Party has reported that MICHELE MUSCAT, the wife of disgraced former Prime Minister Joseph Muscat, has split from her husband, and moved out of the family home. Mrs. Muscat, said to be on the verge of hysteria at the prospect of prison time for money laundering, is known to fear the long arm of American justice.

The basis for the marital crisis is well known. Friends of Michell Muscat have asserted that she hates her husband for involving her in a complicated system of laundering  his bribes and kickbacks, as well as cleaning his share of the profits of Malta's many criminal operations, which he received, similar to that of Mafia Dons, as he ordered. Their marriage, known to be purely for political reasons, is more of a business arrangement than a romantic relationship.

We have previously detailed Mrs. Muscat's involvement in laundering the proceeds of crime through luxury fashion houses; she has also been linked to a number of other laundering schemes, and is one of Malta's most prominent targets of investigations conduced by foreign law enforcement agencies.

Joseph Muscat is said to be extremely depressed as the result of his marital strife. He remains out of the public eye, in truth and in fact shut in at home, awaiting his dark future.