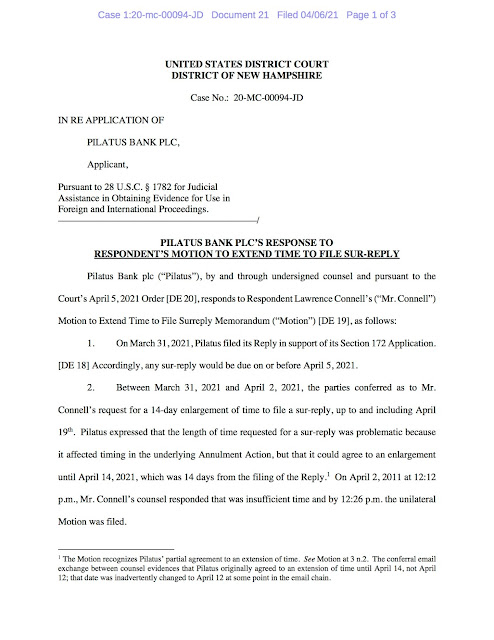 The attorneys for Pilatus Bank, which is seeking to make Discovery upon Lawrence Connell, the former Competent Person, who was supervising the defunct Pilatus Bank in Malta, refused to allow Connell's lawyers additional time to reply to Pilatus' filing. The Court, apparently wondering why Pilatus counsel would refuse to extend professional courtesy to another attorney, gave Pilatus a very short window to explain.

The answer can be found at the end of the Response,. it appears that Pilatus counsel disagrees with Connell's characterization that Pilatus' Reply contains "New Issues."  Don't look for any cooperation from Connell's counsel on the Discovery. This looks to be a contested matter, with Connell's counsel not agreeing to produce any of the evidence Pilatus claims it needs to sue the European Central Bank. The Court has not yet ruled on the issues presented by the latest version of the petition.