US EXTRADITES CHINESE PEP WANTED FOR MONEY LAUNDERING FROM SWEDEN 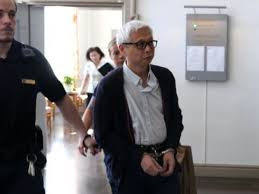 Qiao Jianjun, a former senior Chinese official wanted in the United States on Federal money laundering charges. Qiao, also known as FENG LEE, was flown to Los Angeles to face American justice. he had sought refuge in Sweden, which declined China's request that he be extraditd there, in lieu of the United States.

Qiao stole funds from a Chinese Government grain storage faclity, and used the money to purchase real property in California, as well as enroll in an Immigrant Investor program administered in the US. He  engaged in fraudulent transactions, while laundering the funds through banks in Hong Kong, China and Singapore.
Posted by Kenneth Rijock at Tuesday, June 02, 2020