The day before the filing of the abortive dismissal effort in the Ali Sadr sanctions evasion case, Emil J Bove III, an Assistant US Attorney in the Manhatten office filed a Notice of Appearance. This might not be unusual, but it was Bove who the next day moved to Nolle Pros what has been the Government's signature sanctions case. Oh, and Mr. Bove is the Co-Chair of his office's Terrorism and International Narcotics Division. Coincidence ? We don't think so.

The court file is replete with sealed documents, which is generally an indication that at least one of the defendants is cooperating, and represents an effort to avoid tipping off other potential defendants, so that they will not evade arrest and prosecution. Ali Sadr hinself, or his co-defendant,  Bahram Karini, are probable cooperators.

That is understandable, but to bring in another Unit Chief after the verdict means either:
(1) There are major international narcotics targets the Government has obtained evidence upon; or
(2) This is, underneath, a terrorism case, which by defnition involves national security issues. I personally believe it to be the former. Look at this courtroom sketch:


Why the glaring procedural effor in the flawed effort to dismiss the case through a prohibited post-verdict tool ?  Perhaps Bove, in his rush to file, made a law school-type mistake. We cannot say, but there's a hellova lot more in this case than sanctions evasion. It could be that Sadr's shady ( and now closed) Pilatus Bank shielded terrorist financing and/or the laundering of the proceeds of major international narcotics transactions. We need to monitor any future new case filings where Bove is the principal attorney of record, to locate the truth about what evidence Ali Sadr or Karimi disclosed to the US Attorney's Office. It wouldn't let sanctions evaders totally off the hook unless there was a very good reason. You be the judge as to whether that serves the ends of justice. 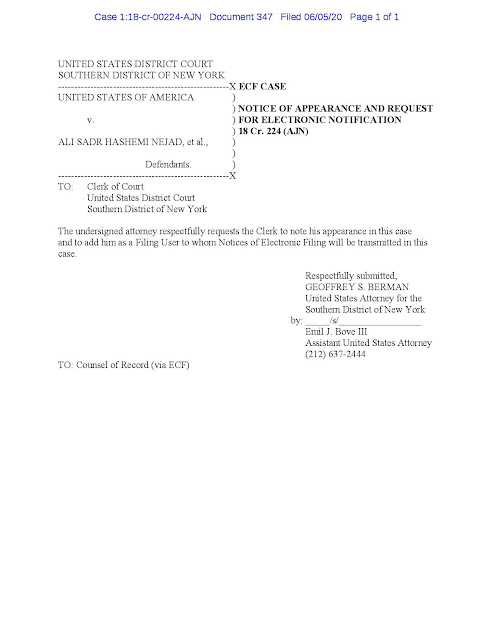