In a new lawsuit that appears to be the first of its kind in Lebanon, the global terrorist organization Hezbollah (Party of God) has been accused of tax and customs evasion, and money laundering. Attorney Majd Harb, who is handling the case, which has reportedly been filed through the Financial Public Prosecutor's Office, alleges that Hezbollah is depriving the Lebanese State of hundeds of millions of dollars of revenue annually, which is sorely needed  to retire debt.


Though Hezbollah's annual budget is remored by some to be the equivalent of one billion US dollars, the terrorist organization pays no taxes. One source asserts that Lebanese evade taxes on total domestic income of $5bn. Hezbollah pays no taxes on salaries and pensions of employees and members, nor does it pay customs duties on its goods when entering Lebanon, and it receives massive amounts of covert untaxed financial aid from Iran, investing a portion, which gives rise to the money laundering charges.

The lawsuit appears to be an attempt to increase revenue for the Government of Lebanon, which is  literally drowning in $80m in debt, and unable to meet its international obligations as they come due. 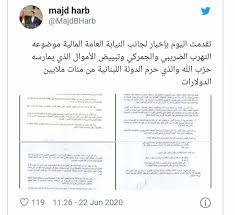