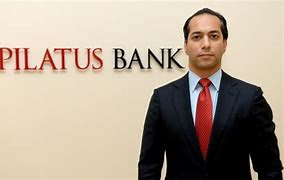 The United States Attorney's Office in New York has filed a letter, requesting additional time to respond to the trial judge's many questions, dealing with possible Discovery and ethical violations in the sanctions case against Ali Sadr Hasheminejad, the Iranian businessman who was convicted by a jury, but for whom the Government now wants to dismiss all charges.

The request, written by the SDNY Criminal Discovery Coordinator and Professional Responsibility Officer John McEnany, asks for additional time to respond to the Court's June 9, 2020 order, citing changes in prosecutors, the amount of material to be reviewed, and the number of facts to be assessed. though we wonder aloud why the large SDNY staff could not complete the assignment within the time frame specified by the Court. Remember, it was the US Attorney who substituted a new prosecutor, has him enter a Notice of Appearance, and the next day files to dismiss the case, after the verdict had been handed down. That does not sound like a valid excuse.

Whether the new prosecutor came on board because those who had tried the case opposed the dismissal we cannot say, but the case looks suspiciously like that obviously political game played out publicly in United States vs. Michael Flynn , though we reserve judgment on the reasons, as they are not yet known.

The letter provides the Court with the Government's position on the dismissal, vacating the verdict, to avoid any negative immigration consequences for the defendant, who is not a US citizen, but a lawful permanent resident, who has lived here for some time, and whose extended family also resides here.

The letter also agrees that the Court retains supervisory jurisdiction, regarding the possible imposition of sanctions for ethical violations and Prosecutorial Misconduct. Now we see why the answer to the Court's questions are not yet completed; rest assured that they will be carefully and tersely crafted, as the discovery violations, alone, admitted by the US Attorney's Office, could result in much more than a slap on the writs. We note that the Court has previously found violations in prior cases.

Whether justice has truly been served, or whether a guilty defendant's subsequent cooperation is more important than imprisoning a major sanctions violator, as a deterrent to others who would consider such criminal activities for profit, remains to be seen. Do we really want Ali Sadr's information more than we want him to answer for his crimes ? That question requires information not publicly available, nor should it be, but it had better be extremely useful. Otherwise, a talented team of prosecutors toiled in vain, in a complex and hard-fought case. 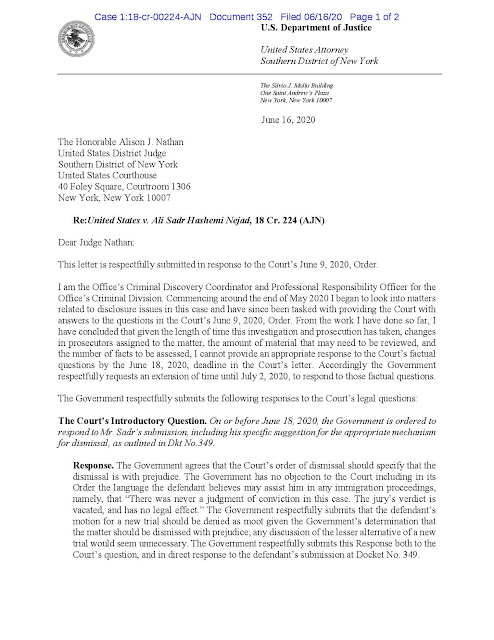 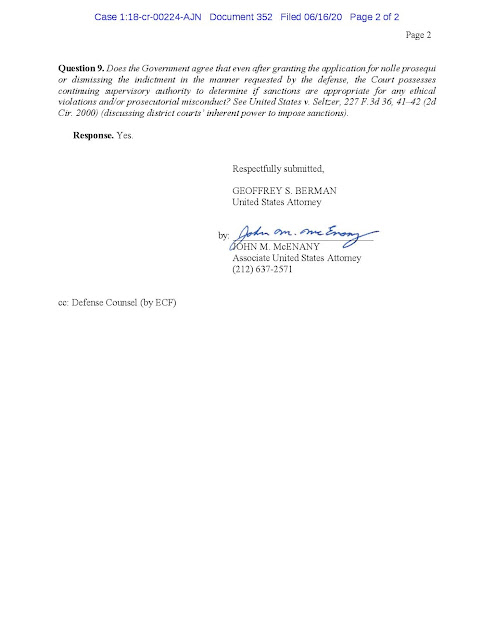