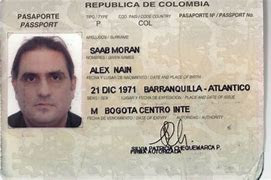 ALEX NAIN SAAB MORAN, wanted in both the United States and Colombia on money laundering charges, was reportedly arrested in the Republic of Cabo Verde (Cape Verde), on an INTERPOL Red Notice issued by the US. Saab is a member of Venezuela's inner circle, close to President Nicolás Maduro, and reportedly assisted Venezuela in evading sanctions directed at Venezuela's regime, moving the proceeds of corruption through American banks. We have extensively covered Saab's activities on this blog in previous articles.

Saab was arrested, according to published sources, when a Bombadier Global jet, travelling from Venezuela to Iran, stopped at Cape Verde to refuel. His accountant and auditor were previously arrested in Colombia, and charged with facilitating his global money laundering operations. He was previously believed to have relocated to Italy, after his indictment in the US was publicly revealed. Saab allegedly also laundered the proceeds of narcotics trafficking for Colombian cartel leaders, hence his Colombia indictment.


Although there is no extradition treaty between Cape Verde and the United States, he could be expelled by local authorities, and taken into custody by American authorities, such as recently occurred in Vanuatu, when an American art fraudster was similarly arrested. Saab's name came up as the beneficiary of a money laundering operation run by the former University of Miami expert on narcotics trafficking, Professor Bruce Bagley, who recently entered a guilty plea in US District Court in New York.

His extensive criminal activities in Dominica and Antigua, where he was involved in owning and operating offshore (locally incorporated) banks, and in acquiring both Citizenship by Investment (CBI) and diplomatic passports, attracted the attention of US law enforcement agencies monitoring the use of banks in the East Caribbean states for the laundering of the proceeds of Venezuelan corruption. Allegations of Saab's use of Caribbean banks to transfer the proceeds of crime to Panama and into the United States have never been confirmed, but should surface during Saab's coming trial, should he be, as expected, extradited. 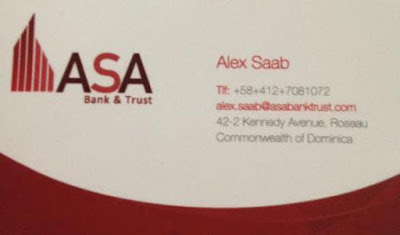 The public defense of Saab in 2019, by the Government of Antigua, even after his indictment, as its "diplomat" (Economic Envoy) and acting on its behalf, became a permanent stain on the reputation of Antigua & Barbuda . He had already been indicted at the time Antigua openly supported him, and was well known to North American bankers as a money launderer. Saab's Antigua offshore bank had a direct relationship to one of the country's most prominent indigenous banks, which was suspected of being the vehicle through which the money laundering funds were channelled.

Compliance officers may be interested to learn that Saab's representatives contacted individuals in New York and Miami to seek to modify, or even eliminate, his profile on the database World-Check, as it was allegedly interfering with his ability to access a number of international banks that he was interested in doing business with. Financial criminals have often sought to "clean up" their profiles on commercial AML databases, threatening litigation if the database providers do not comply. In some rare cases, they have been successful in their quest.

Details of Saab's interrupted mission to Iran, including the identities of other individuals on that business jet, remain unknown at this time, as the information has been classified.