The new book by former National Securty Adviser John Bolton alleges that President Trump, in conversations with Turkey's President Recep Erdogan, assured him that he would intervene to terminate the Federal money laundering and sanctions evasion case against state-owned Halkbank. Trump asserted that he would replace the NYSD prosecutors with his own people.

The case has slowed since the Coronavirus pandemic, due to defense counsel's inability to met with their client in Turkey, but questions have arisen among court observers about why prosecutors are not now zealously proceeding against the bank. Given that allegations that political considerations have affected other criminal cases, those concerns deserve greater investigation. 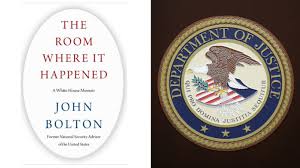 The Department of Justice has filed a suit, in Federal District Court, to prevent Bolton's book from being sold to the public. A fair reading of the Complaint shows that it was signed solely by several political appointees within the Justice Department; no career prosecutor appears as counsel of record, which is significant.