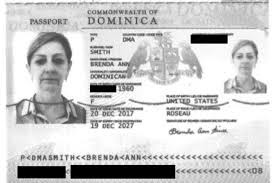 For the benefit of those readers who have not seen the story elsewhere, this is the Domincia CBI passport of one BRENDA ANN SMITH, formerly involced in investments, who turned into a ponzi schemer to cover up her losses. She had been charged with a number of crimes in the United States. She joins the long list of white collar criminals who were able to obtain a CBI passport in Dominica, notwithstanding that a Google search would have revealed her criminal conduct, making her totally unsuitable for a passport. Do not believe those slick press releases, from European and Middle Eastern CBI consulancies, attesting to Dominica's due diligence procedures. Here's your proof.
Posted by Kenneth Rijock at Friday, June 19, 2020