IS THIS DOMINICA DIPLOMATIC PASSPORT REAL, COUNTERFEIT, OR A LAW SCHOOL EXAM QUESTION 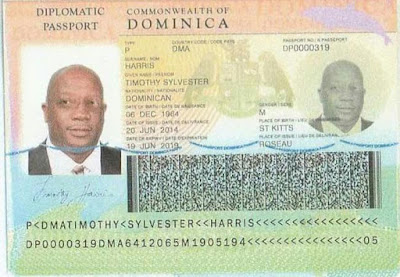 (1) A Dominica CBI passport of St Kitts & Nevis leader Tomothy Harris, at which point he has violated Kittitian laws regarding the requirement that elected leaders must not have allegiance to any foreign nationality or jurisdiction; or

(2) A very good counterfeit, considering the embedded photographs; or

(3) A law school exam on what not to do if you are a member of the privileged class in a developing nation, where senior government leaders think that they cannot be charged with anything at home, when local law prohibits anyone who owes allegiance to a foreign jurisdiction from serving in the National Assembly, the Kittitian Parliament. Both passports state that the holders are of Dominican nationslity; Puzzle that one out.

Nobody has, of yet, determined which choice is accurate. The passport photo was the subject of great media interest, some time back, after it was revealed that the Leader of the Opposition, Harris' political adversary, also had a Dominica Diplomatic passport. Is there anyone in East Caribbean government who is not corrupt ? 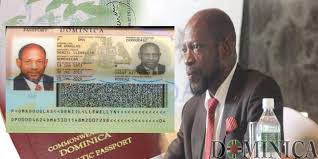