Questions are being openly asked why none of the former directors of the failed Pilatus Bank have been investigated by the authorities in Malta. Perhaps the most brazen example is former non-excutive director ARMIN ECKERMANN, who arrogantly bragged, before several witnesses, about what he really did for the bank. Herr Eckermann is currently the Chairman of the German Maltese Business Council, which is supposed to promote ethics in business and adherence to regulatory compiance. How he has been allowed to hold that position in Malta, given the Pilatus scandal, remains a mystery that I am sure the European Union would appreciate an answer. Don't the German  and Maltese Governments periodically update their due diligence ?

According to reliable sources, here are a number of the statements about Pilatus that Eckermann has made to his friends and business associates:

1. As the non-executive director, he was required to approve all prospective Pilatus clients, which he estimated at around one hundred, making it an easy task. ( Where are the due diligence files, I wonder ?)

2. He brushed off questions about the propriety of banking citizens from Azerbaijan, and went so far as to state that even Politically Exposed Persons (PEPs) have the right to a bank account. ( PEP bank accounts in the EU are a privilege, not a right, and they are not easily opened, due to Source of Funds and risk issues).

3. When questioned about future liabilities of Pilatus, he stated that Maltese authorities don't care what non-executive directors do, and that he will never be investigated. (This statement runs against European Central Bank Guidelines, which detail their higher responsibilities)

4. When Pilatus bank initially failed, he stated that he had a meeting with the head of MFSA to fix the issue, and after that, suddenly, FIAU no longer complained about the bank.(this exposes corruption issues that require investigation)

5. Regarding the assassinated Daphne Caruana Galizia, he admitted that it was his original idea to bring a suit against her in the United Kingdom, as that would be the only way to silence her.

6. He stated that the reason the bank's safe was in the kitchen was because the other room was being painted.

7. He predicted that Pilatus would sue Malta for billions of Euros. 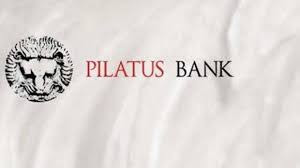 Given what you have just read, who will explain how Mr. Eckermann remains the Managing Director of the Finantia Bank representative office (FINANTIA MALTA LTD.); Are all Maltese regulators asleep at their desks ?

Whether justice will ever be served in Malta for the Pilatus Bank scandal remains an open question.
Posted by Kenneth Rijock at Saturday, June 06, 2020