The Government of Venezuela, with US sanctions in place on PDVSA, its national oil company, has elected to request that its oil clients pay for its products by remitting funds, in US Dollars or Euros to Gazprombank JSC, a Russian state-owned bank. This Venezuelan act, obviously designed to evade and avoid seizure of oil sales proceeds by the United States, due to Russian protection, nevertheless exposes the Gazprombank bank, its senior staff,  and its affiliates abroad to American regulatory, and possibly even criminal, prosecution. Given the poor relations between Russia and the United States, any American moves against Russian sanctions evasion facilitation could invite retaliation.

Gazprombank's wholly-owned Swiss subsidiary, Gazprombank (Switzerland) Ltd., could play a primary role in assisting Venezuela, but given American actions in recent years against Swiss banks engaged in assisting affluent Americans to evade taxes, there may be consequences if other Swiss banks facilitate the movement of oil sales proceeds. The last thing that Switzerland's major financial institutions need now is more trouble from the US Treasury Department, and they may choose not to cooperate, rather than become involved, which will entail still more negative publicity about sanctions, which could cause the loss of depositors. 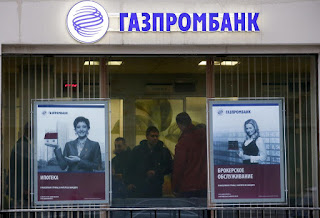 Whether the Maduro government in Venezuela remains in power long enough to implement the direction of payments into Gazprombank is not known, as well as the ultimate destination of any payments made to the bank. Will the funds end up paying the Venezuelan government's salaries and expenses, or in Swiss bank accounts of Maduro regime officials ?