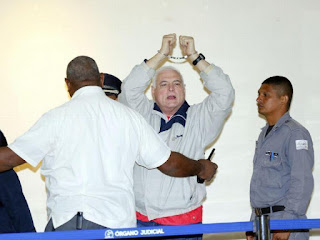 A suit recently filed in the Republic of Panama has charged that Ricardo Martinelli, Panama's corrupt former president, presently incarcerated in El Renacer Prison while awaiting a March trial, cannot run for Mayor of Panama City, as he failed to meet the residency requirements. Panamanian law mandates that a candidate must reside in the district where he is running for public office for a period one year.

Martinelli fled Panama when his term as president expired, and lived in Miami for three years, until he consented to be extradited to Panama, in June 2018, while proceedings were in progress, Therefore, he has not fulfilled the residency requirements to run for public office. The suit, which was filed by the father of a siting minister, will be closely watched by observers of the Panamanian judicial scene, which is notorious for corruption, and where sitting judges routinely accept bribes to fix cases.
Posted by Kenneth Rijock at Sunday, February 03, 2019