The owner and principal of a New York-based investment fund that promised a high rate of return from the construction of an international airport in Plasencia, Belize has entered a guilty plea in New York District Court, Brent Borland's Belize Infrastructure Fund I LLC failed, and 40 investors of record lost $22m. The investments, which were promissory notes, were supposedly secured by unencumbered real property located in Belize, was either pledged, or non-existent.

If the investors had simply conducted an effective due diligence investigation, they would have learned that the fraudsters used the same real estate over and over again, to "secure" the promissory notes, when the equity in that realty was insufficient to collateralize all the debt. Investors who do not have the foresight to check things out in advance through an attorney, and who are dazzled by the promise of double-digit returns, often end up with nothing.

The money was supposed to be a "bridge loan," pending permanent financing for the 10,000 ft. airport runways, associated structures, and medical center. There has been no construction, and the defendant used much of the money to fund a luxurious lifestyle, including his wife's $2m credit card debt. 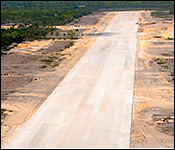