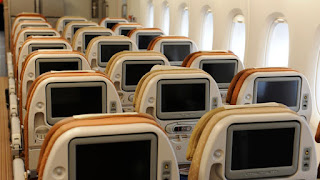 Many late-model entertainment centers that sit on the seat-back of certain airliners, which provide motion pictures, television programs, music, video games and other features for air travelers, have a feature not listed in your program guide: a fully-functional camera.

While there is no publicly-available list of all airliners so equipped, Singapore Airlines' spokesmen have stated that there are cameras on Airbus A350 and A380 aircraft, and on Boeing B777 and B787. American Airlines and United Airlines have also admitted to have cameras on board.

The manufacturers installed the cameras for future consumer use, such as seat-to-seat communication, but the possibilities for use in counter-terrorism investigations should be investigated. When coupled with a facial recognition software system that has access to global terrorist databases, seat-back camera images could alert law enforcement agencies, and intelligence services, in real-time, to the presence of suspected terrorists, or terrorist financiers on board an aircraft in flight. 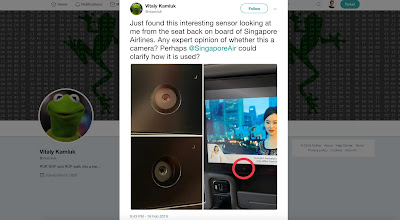 Though there may be privacy advocates who object, it is doubtful that the law will find that there is an expectation of privacy on board an airliner engaged in interstate or international travel. The counter-terrorism benefits of access to these images, as well as building an image database of  airline travelers, cannot be underestimated.