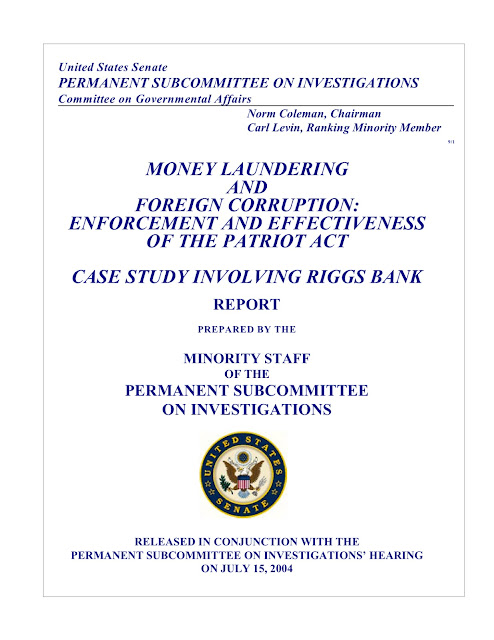 Corrupt Spanish prosecutors and law enforcement agencies operating out of the Canary Islands, far from the effective control of Madrid, and with a history of targeting wealthy foreign nationals, to seize their assets, actually altered a landmark US Government Report in order to frame a Russian businessman residing in Spain, Vladimir Kokorev, and steal his real estate holdings. No wonder members of the European Parliament have accused them of widespread human rights violations.

The groundbreaking 2004 report of the US Senate Permanent Subcommittee on Investigations, entitled Money Laundering and Foreign Corruption: Enforcement and Effectiveness of the PATRIOT Act*, which covered the activities of officials in Chile and Equatorial Guinea, did not once mention or refer to Mr. Kokorev. Spanish authorities later altered and forged references, adding his name and implicating him in criminal conduct in a doctored Report, which was then used to illegally obtain an arrest warrant for Kokorev, and later, an INTERPOL Red Notice. Read the entire Report yourself if you doubt that these statements are accurate.

These wants and warrants were employed by the Government of Spain to extradite Kokorev, as well as his wife and son, from the Republic of Panama. Spain has not, in 14 years of investigation, produced any evidence of guilt of money laundering activities, but it held Kokorev in custody for several years, without cause.  We have previously reported, in depth, regarding the  disgraceful acts of the Canary Islands judiciary in this case.

When corrupt government officials, under color of law, go after foreign nationals residing in their jurisdiction, solely to confiscate and take their assets, and are recorded making prejudicial statements about their nationalities, then that government, due to its despicable conduct, deserves to be targeted for its human rights violations, and to have Country Risk raised to the highest level.

Any country whose law enforcement community forges a document issued by the United States Senate, and uses it to target an innocent businessman solely for political and monetary gain, and in its courts, violates the individual's human rights for years, should have such egregious conduct exposed.