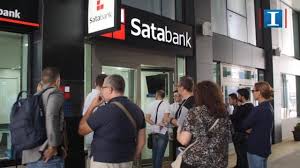 Satabank, owned by Bulgarian interests, was placed under administration last year by Malta's regulatory agency, when the bank's 12,000 accounts were frozen as part of a clampdown due to money laundering concerns. The country's Financial Intelligence Analysis Unit found suspected ties to organized crime among the depositors, including several online gaming companies.

A large number of local businesses in Malta, who were Satabank customers, all suffered serious losses when their operating capital, which consisted of deposits at the bank, was frozen in October; some have been forced to close their doors. Whether clients of the bank were laundering money remains an open question, as well as why it took Maltese regulators years to act on suspicions.

Satabank's weekly press releases for bank clients appear to be vague and imprecise, and do not finitely explain either the examination process, nor exactly when refunds will be made to depositors, especially corporate clients. Coming on the heels of the Pilatus Bank scandal, it has left not only Maltese nationals but the financial world at large questioning the ability of Malta's regulators to adequately supervise their country's financial institutions, and have caused Country Risk to be elevated by many foreign banks, concerned about Malta's banking structure.