Reports from the Persian Gulf States indicate that there has been a major scandal exposed, involving unethical CBI consultancies which have preyed upon applicants from that region, and who have financially benefited from the fraud. The consultancies, which have misrepresented the type of CBI investment their customers are making, (meaning the more expensive real estate option) to obtain citizenship and St Kitts passports, are then pocketing the difference, which is then covertly shared with developers. Whistle blowers, who are legal professionals in the UAE, exposed the scam.

The result is that money is never paid in for construction purposes, resulting in a reputed loss of an estimated $30m-$100m, which is not supporting CBI project development, as required by the CBI contracts. The applicant never receives the benefit of the real estate option, and the construction projects are never completed. A large number of them are now lying incomplete and dormant in St Kitts, as evidence of the scam.

Additionally, forged documents are prepared and presented to CBI applicants, who are deceived as to the actual investment details of their CBI agreements. 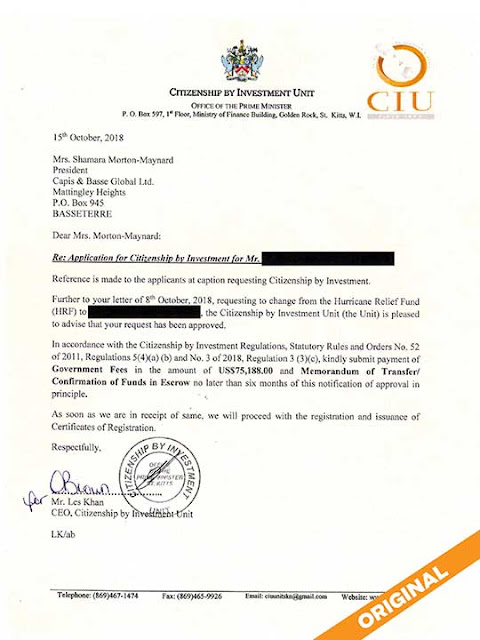 To make matters worse, the Opposition leader has promised, when he is returned to the office of Prime Minister, to revoke all the CBI passports and citizenship agreements that were fraudulently entered into, irrespective of the innocence of the applicants in the scheme.  The scandal threatens to affect the stability of the present SKN government, as charges and counter-charges of misconduct and criminal activity are made, and hurled at the sitting government and the CBI agency, as well as at the guilty CBI consultancies engaging in this fraud in the Persian Gulf States.

Given the transnational elements of the fraud, criminal prosecution is highly unlikely. Observers of the East Caribbean CBI industry have long warned that, without any regulatory agency having jurisdiction over the consultancies, legal and ethical violations were likely to occur. Many CBI investors, who generally made their purchases without the assistance of an attorney, are now in danger of losing their CBI passports, and their entire investment.
Posted by Kenneth Rijock at Monday, February 11, 2019