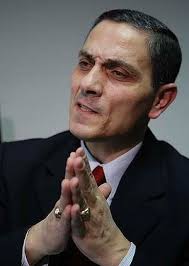 Update: The court docket in United States vs. Viktor Bout, et al*, the case pending against the extradited Richard Chichakli, indicates that he entered a plea of not guilty to the charges pending against him. Needless to say, the Court did not release him on bond;  Chichakli has been a fugitive since the criminal action was filed four years ago, and he lived openly in Moscow much of that time.

What is more interesting is the fact that no criminal defence attorney has filed a Notice of Appearance** on his behalf, Federal Defender Sabrina Shroff, who has represented several high-profile terrorists, as well as Russians, and Iranians, appeared for Chichakli, but only for the strictly limited purpose of bail. the question remains: will he change his plea, and work out a deal with the prosecutors ?

His precise role during his association with Bout remains a mystery; some claim that Chichakli, who served in the United States Army after he emigrated to America, has been an intelligence agent, but for which country ? Russia has been mentioned as a possibility. Then we have the aviation assignments Viktor Bout reportedly did for the Central Intelligence Agency. Who were Bout & Chichakli collecting intelligence for ? That is one reason why many court watchers are hoping that this case actually goes to trial, which would give his defence counsel the opportunity to explore these issues in a public forum.

In a public comment to the media about the Richard Chichakli case, Viktor Bout accused the United States of manufacturing the criminal charges. Bout declined to detail his relationship with his former associate, explaining that it required clearance form his counsel.

We shall continue to follow all developments in this case as they occur.