THERE IS NO IRANIAN SPRING: DO NOT LET YOUR GUARD DOWN ON COMPLIANCE REGARDING IRAN 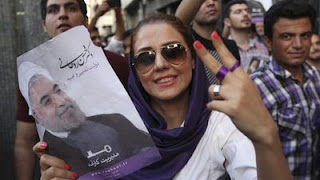 A "moderate" candidate may have won approximately 50.4% of the vote in the recent Iranian presidential election, but you may not moderate your observance of the global sanctions in place against Iran. Lest you celebrate an "Iranian Spring" a little too soon, note well that the Ayatollah himself, the real power in Iran, warned the country about the dangers of straying from the path that the revolution has chosen for the nation.

You may also want to bear this in mind:

(1) The Iran Revolutionary Guard Corps [IRGC] is firmly in control of much of the country's industry, in addition to its military capabilities, both domestically, and abroad, in its Al Qods Force. The IRGC will not go willingly into a reform period in Iran.

(2) So long as the illegal WMD [nuclear] and ballistic missile programmes remain in operation, neither the US nor the EU will relax sanctions, notwithstanding what media editorials are claiming.

(4) Iranian soldiers, and arms & ammunition, continue to flood into Syria, and this flow is not going to stop just because the new President of Iran is less radical than his predecessor.

Iran sanctions violations, due to compliance negligence or malpractice, continue to pose the greatest threat, of fines & reputation damage, to banks in North America or the European Union. Please do not be lulled into complacency by the Iran election results; it will not bring about a sea change in Iran this week or this year.
Posted by Kenneth Rijock at Monday, June 17, 2013