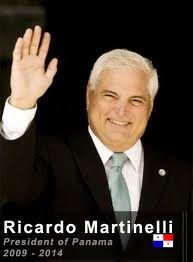 Though he will be leaving office shortly, in 2014, Panama's President Ricardo Martinelli has recently made several ministerial appointments, some for terms as long as seven years. What he has done is more than just assure that his policies and programmes survive into the next president's administration; it is something far more disturbing.

Some of the newly appointed cabinet ministers are linked to Panama's powerful Syrian organised crime group. This criminal organisation has successfully placed its members into every government agency and department in the Republic of Panama, where they act as an early-warning system for exposure of the group's corrupt activities, and easily derail any and all enquiries into their associates' crimes.

A number of these new ministers, who wield a substantial amount of authority in their respective agencies and ministries, will therefore be able to perpetuate the widespread corruption that currently exists in Panama; reform by the incoming administration will be frustrated, and Country Risk will remain at elevated levels for the foreseeable future.